A relay may meet with a variety of ambient conditions during actual usage. In order to avoid unexpected failure in result, testing over practical range under actual operating condition is required. For proper use of relays, the characteristics of the selected relay should be well known, and the conditions of relay use has to be investigated to determine whether they are matched to the environmental conditions, In addition, the coil conditions, contact conditions, and the ambient conditions for the relay that is actually used must be sufficiently known in determining the relay specififcations. The table below shows a summary of points of consideration for relay selection. It may be used as a reference for investigation of items and points of caution.

(1) Contact load
The phenomena in the contacts of relays greatly vary depending on contact load level such as kind of load and current level as
well as contact material and size, opening speed and contact bounce.

*Switching current
AC current is alternately reduced to zero but DC current is not, so the arc discharge current at breaking of load current is hard to be extinguished for DC current.

Therefore the duration of the arc discharge is longer in DC circuit than AC circuit and the maximum DC switching current is smaller than AC load.

In resistive load circuit, it is assumed that there is no inrush or counter breaking current on switching of loads.

*Inductive load
Inductive loads such as electromagnetic relay, solenoids and motors easily generate a high counter voltage between their coils and cause arc discharge across the relay contacts.

In circuit with load such as motor, solenoid, transformer and others, an inrush current of several times larger than the steady current is generated at the time of connecting the load.

It is necessary to select the contact that has a sufficient capacity for the conditions.

*Capacitive load
In a capacitive load circui, an inrush current of 20 to 40 times large than the steady state current is produced. A surge suppressor should be used to prevent contact welding.

(2) Contact material
Relay contacts must be made from material that allows contact resistance to be low and stable, that is not quickly worn by the arc, and that has a high fusing point. At present there is no material that meets these conditions, and it appears unlikely that one will be found in the near future.

(3) Low level circuit
Circuits with several volts and several mA or less are called low-level circuits. At low levels, silver contacts form an oxide or sulfide film on their surface under certain conditions, which makes contact resistance unstable. If the circuit impedance is high, although the high contact resistance itself does not cause problems, the noise is easily produced. To maintain stability of contact resistance in a sulfurating atmosphere, contact of gold overlayed on silver-palladium are effective.

(1) Coil voltage of DC relay
For the operation of DC relays, standards exist for power source voltage, with DC voltage standard set at DC5,6,9,12,24 and 48. Because of the gradual increase or decrease of the current impressed on the coil causing possible delay in movement of the contacts, there is a possibility that the specified contact capacity may not be satisfied.

So, consideration should be given to the method of applying voltage on the coil.

As a power source for DC relays, a battery or either a half or full wave rectifier circuit with smoothing capacitor is used.

The characteristics with regard to the excitation voltage of the relay will change depending on the type of power source, and thus, in order to display stable characteristics, the most desirable method is perfect DC.

In the case of ripple included in the DC power source, if the smoothing capacitor is too small, humming develops and unsatisfactory condition is produced, due to the influence of the ripple.

This ripple is calculated using the formula described in Fig.4 and it is necessary to give consideration to use of a power source with less than a 5% ripple.

When contacts open and close, the contacted surfaces slid together, thus effecting a breakage of nonconductive film formed on the contact surfaces.

(b) Contamination of contact surface
The Possible causes of contamination that effects increases in contact resistance are as follows.

*Adherence of fiber, scale and particles of plastic mold, etc.

*Adherence and deposits of non-conducting material produced through a chemical reaction with the gas absorbed onto the contact face.

*Adherence and deposits of carbon powders produced at contact surface

Oxidation and sulfuration of metallic powders on the contact surface.

(c) A bifurcated contact is contaminated
The bifurcated spring is cut deeply enough and separated so as to provide a good independence in a contact even when some insulating particle is trapped between contact on one side.

In this case, the contact of the other side can serve to maintain a good contact, with the sufficient mechanical independence between the two members. So, the bifurcated contacts have successfully reduced contact failures.

(d) Sealed relay
Sealed relays are available. This feature excludes the ingress of organic gases and dust in atmosphere and allows immersion cleaning.

(2) Coil
*Nominal Coil Voltage (Rated Coil voltage)
A single value voltage intended by design to be applied to the coil or input.

*Pick-up Voltage (Pull-in Voltage or Must Operate Voltage)
When the voltage on an unoperated relay is increased, the value at or below which all contacts must function (transferred). The pick-up voltage is generally assigned to 70% of nominal coil voltage so that the relay can function without failure owing to fluctuation of voltage supplied, ambient temperature raise and irregularity of coil resistance.

*Drop-out Voltag (Release or Must Release Voltage)
When the voltage on an operated relay is decreased, the value at or above which all contacts must revert to their unoperated position. The drop-out voltage is generally assigned to 10% of nominal coil voltage. Figure 5 shows the relationship between Pick-up Voltage and Drop-out Voltage.

The coil temperature rise can be obtained by the next expression.

In general, the values for characteristics such as pick-up voltage, drop-out voltage and so on are measured at the ambient temperature of 20°C 68°F, Cool Coil conditions. For the Hot Coil, because of it’s pick-up voltage rise, these is a possibility that hat it may not operate under the same conditions as Cool Coil.Thus,care is required. 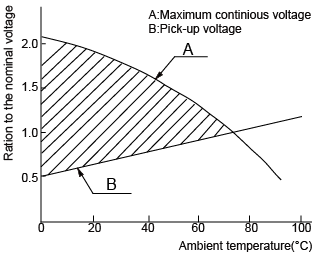 (b) Pick-up voltage
As the ambient temperature rises, the coil resistance increases, pick-up voltage. Figure 7, line B refers to the relationship. The upper portion of line-B in Fig.7 shows the range of voltage which can be applied to the coil. Line-A is maximum continuous voltage. Thus the relay operating range is the portion surrounded by line A and B. 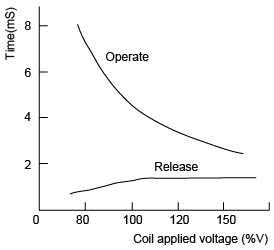 (7) Safety standards
Laws and regulations demand securing the safety of users from dangers such as electric shock and fire lying around household appliances and other consumer electric equipment or devices.

Major industrial countries across the world already have their own safety standards such as those under control of ‘The Electrical Appliance and Material Control Law’ in Japan, UL in U.S.A.,CSA in Canada, VDE in Germany, SEMKO in North Europe and BS in GB.

(1) Silicone compound atmosphere
Silicone compounds such as silicone rubber,silicone paint, silicone grease, etc. emit volatile silicone gas. Note that when silicone is used near relays, switching contacts in the presence of its gas causes silicon to adhere to the contacts and may result in contact failure. In this case, use a substitute that is not silicone based. If the use of silicone compound is inevitable, use a plastic-sealed relay.

(2) Influence of external magnetic field
When transformers, speakers or magnets are located near a relay the characteristics may change and faulty operations may result due to the strong magnetic field generated from the equipment.

The influence depends on the strength of the magnetic field and it should be checked at the installation. In such a case suitable measures such as magnetic shielding or selection of adequate in arrangement of relay should be taken so as to avoid problems.

(2) Shock and vibration resistance
It is ideal to mount the relay so that the movement of contacts and armature is perpendicular to the direction of vibration or shock, as shown in Fig. 10. 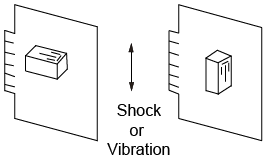 (3) Contact reliability
It is recommended to mount the relays so that the surfaces of its contacts are vertical and in Lipper location of relay inside. Such mounting methods prevent dirt and dust as well as scattered contact material (produced due to large loads from which arcs are generated) and powdered metal from adhering to them. Furthermore, it is not desirable to switch both a large load and a low level load with a single relay.

(4) Adjacent mounting
When many relays are mounted close together, abnormally high temperature may result from the combined heat generated. Mount relays with sufficient spacing between them to prevent heat buildup, This also applies when a large number of bords mounted with relays are installed as in a card rack. Be sure the ambient temperature of the relays does not exceed the value listed in the catalog.

(1) Operate (Set) time
Time from initial energization to the first opening of closed contact or first closing of open contact. This time does not include any bounce time. In case of latching relays, this is called “Set time”.(cf. Fig.1) 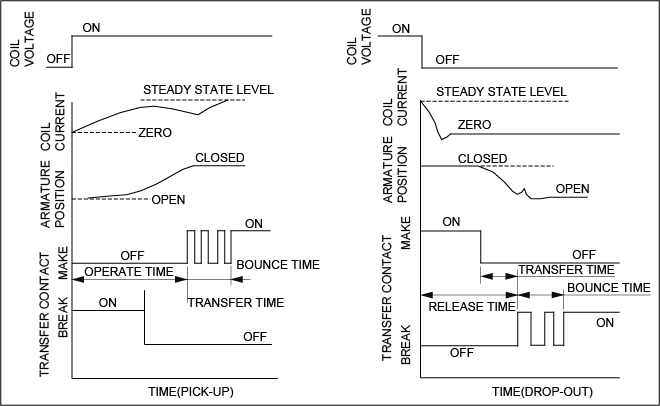 (2) Release (Reset) time
Time from initial de-energization of the relay coil to first opening of closed contact or first closing of open contact. This time does not include any bounce time. In case of latching relays, this is called “Reset time”.

This means the time from initial reverse energization of the coil to first opening of closed contact or first closing of open contact.(cf. Fig.1)

(3) Bounce time
Internally caused intermittent and undesired opening of closed contact or closing of open contacts of a relay.(cf. Fig.1)

(4) Dielectric strength
The maximum. allowable AC(RMS) voltage (50/60Hz) which may be applied between two specified test points, usually for 1 minute in duration. In general, the maximum leak current is 1 mA. 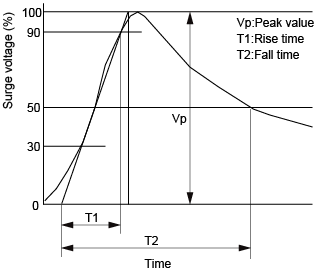 (6) Insulation resistance
The resistance between all mutually insulated conducting sections of the relay. This value changes depending on the ambient temperature and humidity.

(7) Capacitance
The electrostatic capacitance between mutually insulated conducting sections of the relay. Usually this value is measured at 1 kHz.

(9) Vibration resistance
The resistance to the vibration applicable to the relay. expressed as a displacement and frequency range.

(10) Shock resistance
The resistance to the shock applicable to the relay, expressed as an acceleration in G.

(11) Temperature range
The range of ambient temperature in which the relay can be used without damages in its characteristics or functions.

(13) Structure of relays
Relays are classified in 4 types as Fig. 3 by the structure of terminals, cover and case, and mounting method of the relay.